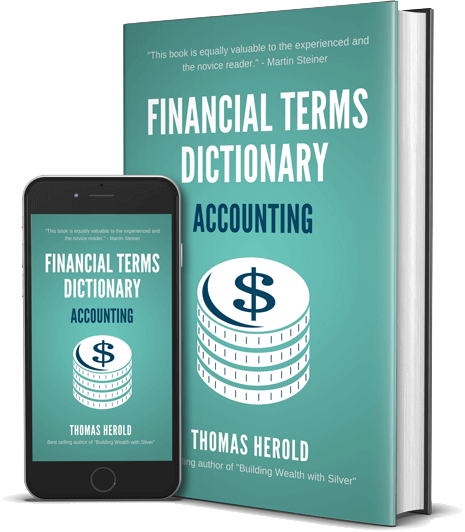 This practical financial dictionary for accounting terms helps you understand and comprehend most common accounting lingo. It was written with an emphasis to quickly grasp the context without using jargon. Each of the accounting terms is explained in detail and also gives practical examples.

This book is useful if you are new to business and finance. It includes most accounting terms for businesses, investors and entrepreneurs. It also covers the lingo that was introduced in the financial crisis of 2008 until 2017. With the alphabetical order it makes it quick and easy to find what you are looking for.

Example Term: What is a Fiscal Year?

The fiscal year refers to an accounting period which governments or companies choose to use for their own accounting and in developing financial statements. Fiscal years are not necessarily the same as the calendar years. The U.S. government employs a different starting and finishing point for its own fiscal year.

The IRS Internal Revenue Service permits companies to choose whether they will use calendar years or fiscal years in their tax computations. When individuals or companies discuss budgets, they often invoke fiscal years. They prove to be a useful reference point when contrasting corporate or government financial results over the medium to long term.

The IRS has its own definition of fiscal year. To them these are comprised of 12 contiguous months that conclude on the final day in any month besides December. This means that where tax reports are concerned, a fiscal year could run February 1st to January 31st. American taxpayers also have the opportunity to utilize either 52 or 53 weeks long fiscal years instead of a 12 month one. In the case of the weeks’ version, the years will rotate back and forth between 52 and 53 weeks in length.

Because the IRS automatically uses a calendar year system, those who employ fiscal years will need to adjust their own deadlines for turning in specific forms and getting in different payments. The biggest difference concerns the tax filing deadline. For the majority of American households and businesses, this will be no later than April 15th after the year in question for which they file. Those taxpayers working with the fiscal year system instead must file no later than the 15th day in the fourth month that comes after the conclusion of their fiscal period. This means that a business choosing to have fiscal years that span from May 1st to April 30th will need to turn in all tax returns no later than August 15th.

The U.S. tax code makes it relatively easy for companies to use fiscal years in their income tax reporting efforts. All that they are required to do is to turn in on time their tax return which covers that particular fiscal period. The companies also have the right to opt back to using calendar years whenever it suits them. To make the change from fiscal back to calendar years, they need to obtain individual permission by asking the IRS. Otherwise, they will have to measure up to the criteria that they outline in their Form 1128 called the Application to Adopt, Change, or Retain a Tax Year.

These fiscal years have a particular way of being addressed. Individuals who are discussing them reference them either by the end date or alternatively the end year. This means that one would refer to the American federal government fiscal year that starts on October 1st and ends on September 30th by saying the government fiscal year which ends on September 30th, 2016. If instead they were referencing spending by the government that happened in November of 2015, they would have to call this expenditure one that occurred in the 2016 fiscal year.