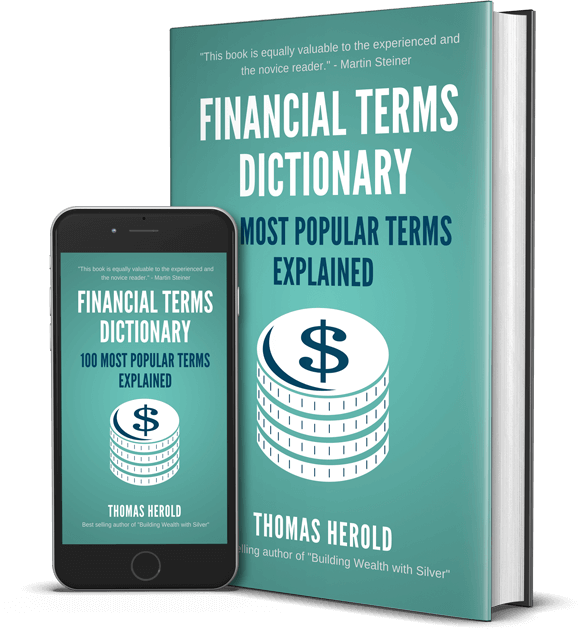 This free practical financial dictionary helps you understand and comprehend the 100 most common financial terms. It was written with an emphasis to quickly grasp the context without using jargon. Each of the financial terms is explained in detail and also gives practical examples.

This book is useful if you are new to business and finance. It includes the 100 most important financial terms for businesses, investors and entrepreneurs. It also covers the lingo that was introduced in the financial crisis of 2008 until 2017. With the alphabetical order it makes it quick and easy to find what you are looking for.

Bitcoin is the name of a new electronic currency. An unknown individual who called himself Satoshi Nakamoto created this currency in 2009. This world’s first widespread virtual currency appeals to many individuals because there are no banks or governments involved in issuing, trading, spending, or processing the transactions. There are also no transaction fees involved. Owners do not have to provide their actual identity to use them.

Bitcoin users like that they are able to purchase goods and services completely anonymously. They also enjoy the inexpensive and simple to use international payment system. This exists because this currency is not heavily regulated nor tied to any single bank or nation. Small businesses tend to like Bitcoin since they do not have to pay any credit card usage fees.

Many speculators have purchased Bitcoins for investment. Booms and busts in this currency are all too common. Those who bought in to the crypto currency early made spectacular returns as the value skyrocketed with growing demand. Others lost fortunes as the price of the Bitcoins subsequently crashed in value.

There are several ways to obtain these Bitcoins. Users buy them on open marketplaces known as Bitcoin exchanges. Those who wish to have them can buy and sell it with a variety of different currencies. Mt. Gox was the largest Bitcoin marketplace until it spectacularly collapsed and went bankrupt. Many clients who held their Bitcoins at Mt. Gox lost most of their money there at the time.

Individuals also buy and sell Bitcoins by transferring them to each other and by paying with them. They can do this with their computers or mobile apps. This is much like sending cash with a digital service like PayPal.

A last way to obtain Bitcoins is by mining them. Mining is the way that individuals create new Bitcoins. They do this by utilizing computers to solve complicated math problems or puzzles. When such a puzzle is solved, 25 Bitcoins are awarded to the group which solves them.

Owners keep their Bitcoins in a digital wallet. This can be stored on a personal computer or in the cloud. A virtual wallet is much like an electronic bank account which permits owners to receive or send Bitcoins, to save their money, or to pay for their goods and services. These wallets do not receive the protection of FDIC insurance as do traditional bank accounts.

To users, Bitcoins are simply computer programs or mobile apps which give the owners the Bitcoin wallet. The payment system is easier to utilize than is a credit card or debit card purchase. An individual does not require a merchant account in order to receive the currency. All an individual has to do to make a payment is to put the payment amount and address of the recipient then click send.

An important fact about Bitcoin is that no one owns the actual network. Bitcoin users control the Bitcoin currency. Various developers work on the software to improve it. Users are able to decide which version or software they use it on, which prohibits developers from forcefully changing the operation. For the software to work properly, all Bitcoin users have to work with programs that abide by the same rules.

As with most new currencies Bitcoin is not without problems. When digital wallets are left in the cloud, some servers have been hacked and coins stolen. Bitcoin exchanges like Mt. Gox have failed. Other companies have disappeared with their clients’ Bitcoins. When the wallets stay on a person’s computer, they can be destroyed by viruses or accidentally deleted.

Increasing government regulation appears to be in the future of Bitcoin and other crypto currencies. Because of the anonymous nature of the currency, they have evolved into the preferred payment method for illegal activities such as drugs and smuggling. Governments are concerned about being able to trace these types of activities back to the users. They are also worried about not being able to tax transactions made in Bitcoin currency.

Let Me Know Where to Send Your Free Basic Edition Ebook...